Welcome to the Middle East. A land full of ancient history, authentic cuisine and rich culture.

Welcome to Tel Aviv, a thriving, reinvented city on the Mediterranean coast. Feel the bustling energy humming around you and jump right into this epicentre of Israeli-chic. The city cultivates an ever-evolving restaurant scene paired with sparkling coastlines, resulting in an irresistible hub of urban sophistication. This is Tel Aviv, a non-stop celebration of innovation and excitement. Tonight, join your fellow travellers for a welcome reception at your hotel.  Hotel: Isrotel Tower Hotel, Tel Aviv (TWO NIGHTS)

This morning, walk the narrow stone streets of Jaffa, an ancient port city. Then it’s on to Carmel Market for a walking food tour. Sample fresh hummus and savoury street foods as you connect with the locals, getting a true taste of everyday life. This afternoon, perhaps you will relax on sandy beaches or opt to join your Tour Manager in the “White City” (UNESCO), highlighting famous Bauhaus architecture. Enjoy an evening at leisure to take in the city’s captivating nightlife of rooftop lounges, sophisticated cocktail bars, and more.

Follow the coast to the ruins of the ancient city of Caesarea, built by Herod the Great in the 1st century BC. Chat with locals over a plate of enticing Arabic food as you bond with members of the Druze community at a home-hosted lunch. Afterward, in Haifa, take in the breathtaking panorama of the Baha’I Shrine and Gardens on Mount Carmel (UNESCO). Your day comes to a close in Tiberias, a sacred city overlooking the Sea of Galilee. Hotel: Leonardo Plaza Hotel Tiberias, Tiberias (TWO NIGHTS)

Begin your day by exploring the excavated ruins of Korazim, a town believed to be cursed by Jesus because they did not heed his teachings. Korazim is in a relatively remote position, further up the hills overlooking the Sea of Galilee with gorgeous panoramic views. Enjoy lunch at a winery in the Golan Heights, a slice of fertile agriculture set on a rocky plateau. Set sail on the tranquil waters of the Sea of Galilee aboard a replica boat reminiscent of the 1st century.

Depart Tiberias for the historic city of Nazareth. Visit the church of the Annunciation and Mary’s Well. Continue south to the Mount of Olives and marvel at the all-encompassing view of Jerusalem, including the Shining Dome of the Rock. Housing layers of history and heritage, allow the resilient spirit of the city to capture your senses. Tonight, get to know a local family as you enjoy a traditional meal in their home. Hotel: Dan Panorama Jerusalem, Jerusalem (FOUR NIGHTS)

Walk in the footsteps of millions before you and discover the old walled city of Jerusalem (UNESCO). On this walking tour, see the Western (Wailing) Wall and the storied path of the Stations of the Cross. Immerse yourself in the everyday culture of Jerusalem’s Shuk (the Bazaars of the Old City), with each narrow street dedicated to different trades passed down through generations. As you explore, breathe in the smell of freshly baked bread, roasting sesame seeds, and savoury spices. The remainder of the day is yours. This evening we will join a tour of Jerusalem by night, which includes a sound and light show.

Begin your day in the city of Bethlehem, spread along the Judean Hills. Visit the Church of the Nativity** - the birthplace of Jesus and the first church ever built. This afternoon, return to Jerusalem for a poignant visit to Yad Vashem, the World Holocaust Remembrance Centre. You won’t just tour this powerful museum, but you’ll get to have an open conversation with a Holocaust survivor. The rest of the day is at leisure.

Travel to the desert fortress of Masada (UNESCO), situated on a cliff next to the Dead Sea, Ascend the ancient walls of Masada by cable car and explore Herod’s Palaces, the Roman Camp, and the Synagogue. Float in the tranquil healing waters of the Dead Sea, experiencing its unique natural buoyancy. This evening, join your fellow travellers for a farewell dinner and toast the end to an incredible journey.

Your time on tour comes to a close today, but there’s more of the world to see. Now it’s off to make new memories. This morning, travel to the Jordan Valley, crossing the border into Jordan. Journey on the Desert Highway to the city of Madaba, the City of Mosaics.” Visit the Church of St. George to see the famous 6th-century Byzantine mosaic map of the region, one of the oldest in existence, and the museum where many other spectacular mosaic examples are on display. You will also visit Mt Nebo, where Moses saw the Promised Land – present day Israel – and is believed to be laid to rest. Continue to the ancient city of Petra for a 2-night stay. This evening, experience the flavours of the region during dinner at a local restaurant. Hotel: Petra Marriott Hotel, Petra (TWO NIGHTS)

Enjoy a full day tour of the remarkable stone-carved city of Petra (UNESCO), one of the new Wonders of the World. A treasure of the ancient world, Petra was “hidden” behind rugged mountains prior to its discovery in 1812 after being lost for over 500 years. Explore this breathtaking city, carved from sandstone by the Nabataeans, with an expert guide and learn about the importance of Petra to the ancient trade routes, the history of its prominence and decline, its rediscovery, and efforts at preservation.

This morning we depart for the immense desert of Wadi Rum, stunning in its natural beauty and home of the famous film, Lawrence of Arabia. Experience desert life and learn about the fascinating history of the Bedouin people who have lived for generations in the Wadi Rum’s stark, fragile and unspoiled desert. Pause for lunch at a local campsite before relaxing on an afternoon-long transfer to Amman, known as the “White City” because of white limestone used to construct the majority of the buildings. Hotel: Amman Marriott Hotel, Amman (ONE NIGHT)

Transfer to the airport for your flight home.

*Land only Tour- Ask our office for a flight quote* 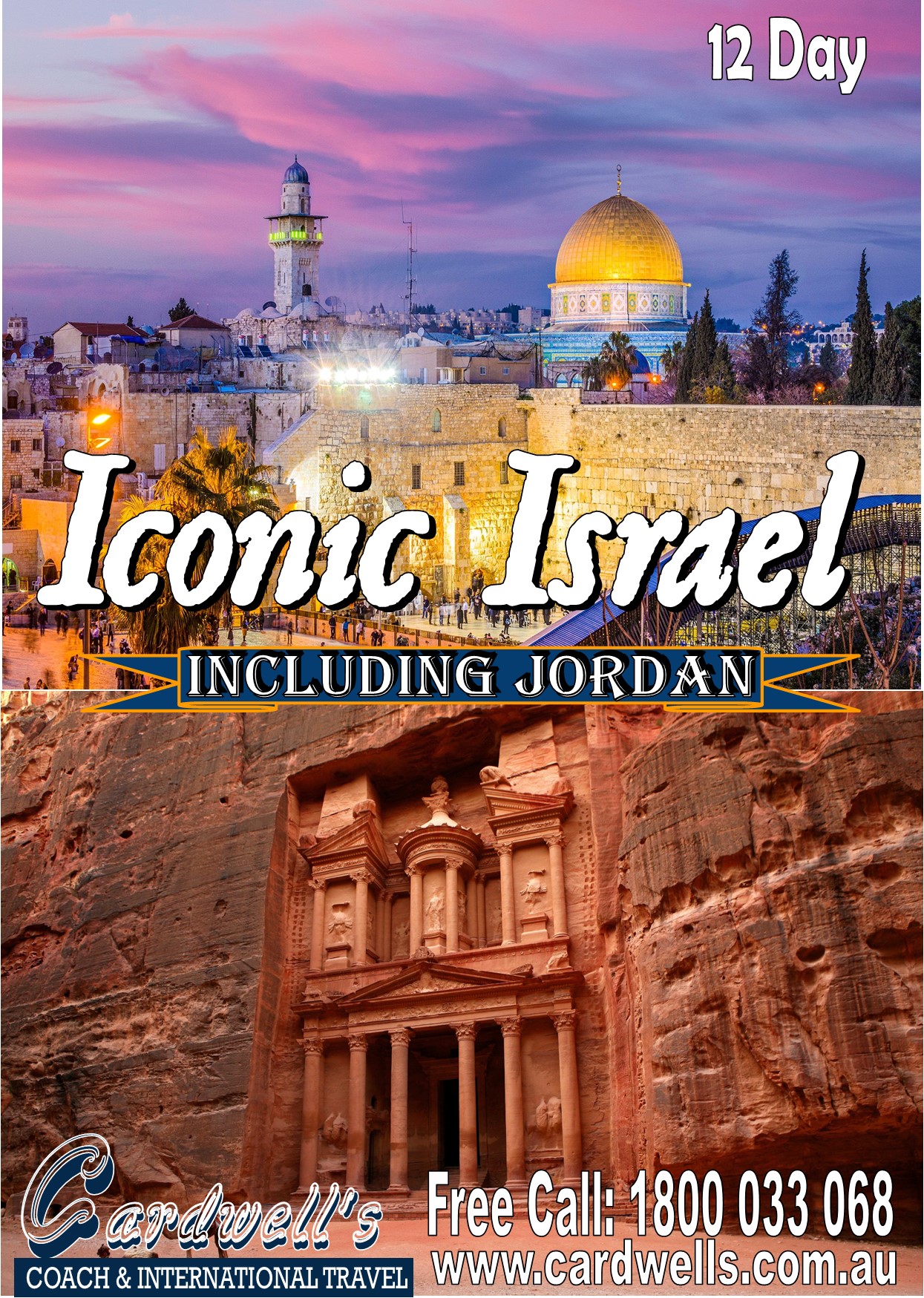